Kristina moved to Amsterdam four years ago. She has been based in New West ever since. She caught herself thinking that she felt comfortable living in a neighborhood with lots of women wearin a ‘hijab’, even though it is rarely seen in her home country Russia. The majority of the population in the Kolenkit district is of Moroccan descent. Kristina’s research was triggered by her curiosity to get to know her own neighbors. Who are the women she lives so close to yet knows so little about? What are their traditions, daily habits and are their similarities in the ways we live our life? To find out, she joined one of the morning tea gatherings in the neighborhood and asked if she could sit with them. “Of course you can,” replied Fatima. “We are the same!” This sentence became the logline during her Moroccan journey within the city. The meetings became her weekly routine and she started observing the rituals on and around the table. She found a metaphor of safety and warmth in the Moroccan tea ritual: it felt like a place where it was of no importance which group, ethnicity or religion you belong to. She took her findings and a mock-up of the setting around the city to be shared with others. 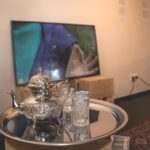 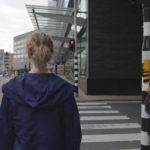 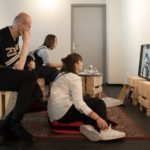 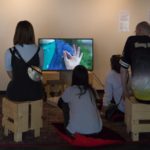 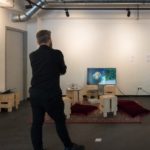