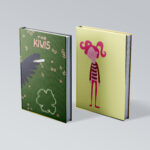 Deprecated: wp_make_content_images_responsive is deprecated since version 5.5.0! Use wp_filter_content_tags() instead. in /customers/b/3/c/citycircles.nl/httpd.www/wp-includes/functions.php on line 5211

The idea is to develop an immersive and informative picture book to educate children (an important target demographic for the global pet industry) about the systemic suffering of parrots in the Netherlands, with relatable avian main characters on the one hand and humans (“kiwis” in crowspeak) on the other hand. The goal is to show children how the lives of captive parrots compare to the lives of free crows, and to allow them to see the plight of the parrots at the hands of humans from the perspective of the parrots themselves.

In 2015, 3.9 million wild birds were kept in the Netherlands as “ornamental or singing birds”; parrots as such are the fourth most beloved pet among the Dutch, after dogs, cats and fish. Furthermore, the EU is the number one importer of parrots worldwide. Yet, the suffering of captive parrots and their near extinction in the wild are two undeniable and unjustifiable facts. Our designs for aviaries and bird cages ignore the fact that flying is integral to being a bird (parrots fly at 65-80 km per hour). We choose to ignore that parrots bred in captivity remain wild, that parrots perceive humans as predators, that parrots are social by nature and that they suffer immensely for being separated from their kin, and then for their entire lifespan which can last a 100 years. Even though parrots are smarter than most monkeys, we choose not to grace them with comparable empathy. In our minds, we don’t consider a parrot “as free as a bird” (such as, say, a crow), but as a being inseparably bound to a cage. This deeply ingrained, subconscious misconception of ours can only be undone with a proactive, deliberate and consistent action.

In the attempt to dissociate the parrots from the cage in the minds of the children, the story is narrated by Sem, a baby hyacinth macaw. After he’s rescued by a family of crows, Sem enrolls in a crow school. Lorre, his 8-year old owner, is searching for him with dogged persistence, while his shrewd crow schoolmates use elaborate tricks to hide him. The events take place in eastern Brabant, where Dutch crows are found in their biggest numbers. Colour is a very important narrative tool, in order to visually represent the world as the birds see it with their superior eyesight that allows them to see the ultraviolet range of colours. While Lorre, who’s a kiwi can only see a dimmer and less complete version of our world, Sem and the crows see the world in a way that would appear magical to Lorre. Sem’s fluency in kiwispeak is another important narrative tool, since this gives him a voice in his confrontations with Lorre and other kiwis.