The embodied democracy is a system that rethinks democracy at a human scale. It includes its citizens and gives them the tool to express themselves and share their concerns openly and safely. As cities and citizens are part of the VGNP, it is urgent to include politics and opinions. The system aims at linking citizens of the park to its decisions and strengthens democracy.

People do not share or communicate in the city, as the public space doesn’t offer freedom and ownership to its citizens. The role of a citizen seems abstract and useless, but it is political. Politics are not accessible. It is complex and far. The lack of connections and discussions creates confusion and misunderstanding. The system and its space design allow democratic dialogues to take place. It engages people in discussions and interactions while being respectful. It ables new connections and understanding while giving a meaningful role to the citizens. Through those dialogues, inspired by the Socratic dialogue method, the citizens will follow specific rules for discussions. The discussion system uses basic rules of respect and some more complex to allow the dialogue complexity and relevance while being safe.

Embodied Democracy is a way to include citizen’s opinions and desires directly in the decision-making of a locality, a city, or some specific parts of the Van Gogh National Park.

Through Democratic Discussions, citizens can express how they feel, share stories and together think of a possible future for their city. It creates a network of people in the city space. Depending on the raised question, people from varied or similar backgrounds can meet and imagine how their life could be better.

The discussions offer more than the possibility of making the city better on a personal scale. It empowers citizens and gives them a voice within a democracy, in the context of a multi-cultural city can be foreign.

The outcome of the discussion is then shared with other citizens and municipalities to able to change. 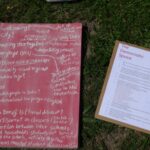 Embodied Democracy is more than a space and a system. It is also a network. This network exists through a website on which it is possible to sign up and upload a discussion that you hosted. It is a way for cities to get inspired by others and blurry the line between experts and non-experts as it is open to anyone. It is up to you how you want to make it happen.

Democracy becomes a tool that anyone can model depending on local needs and evolve from getting inspired by the diversity of ways of using it. 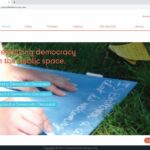