Stained glass is a versatile craft that has been utilised for centuries to tell stories through patterns, colours and symbolism. It has the ability to alter our perception of space by providing viewers with a lens that distorts our surroundings and uses light to influence our senses.
Conducting field research Mabel found a rich stained glass heritage within Brabant, but one that has seemingly become limited in its application. The majority of the stained glass within the city is poorly placed within residential buildings, which often do not provide the correct lighting to fulfil its full potential. In order to revive and shine a new light on the craft in the eyes of the public, Mabel thought to combine stained glass with her research into Vincent van Gogh’s distorted way of perceiving spaces.

Taking on the form of an outdoor exhibition,
Mabel proposes a series of rotating stained glass panels inspired by Vincent’s varied painting techniques. Some of which were connected to his rapid decline in health in his later years, and reflect his colourful state of mind. Each panel would be located in significant spaces related to his heritage, installed where sunlight can properly reveal the vivid colours and textures of each panel. Allowing viewers to look through his eyes and perceive the world as he would have, using stained glass as a colourful lens to do so. Ultimately offering new opportunities for residents to go outdoors and view artworks that are connected to the land on which he stood, giving an insight into his continuously changing painting style and an element of his history that is not yet present within the VGNP. 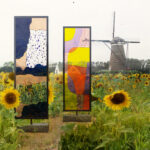 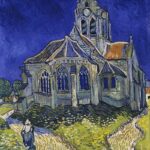 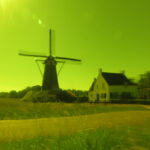 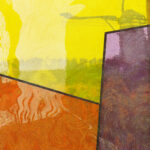 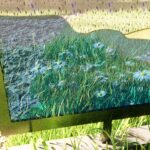