Miyuki enjoys singing. Before the project had even started, she knew she wanted to look for places in the neighborhood where she could perform. But it wasn’t easy: she wanted the singing to be site-specific, as an ode to the daily life there. She looked for echoes near building and at specific architecture for the background. Pipes could function as a delivery for her voice from one place to another. She started playing at playgrounds where she would rotate, slide and swing in the toys. She sneaked into high places to reach out to as many people as possible. Noises that people might normally complain about, were used instead to make music with. People that were singing in the streets, would be accompanied by her. Miyuki found gaps in the city where she could be along and sing. Sometimes, she would only imagine what it is like to sing somewhere – simply because it was illegal to actually go there. This ended up in a map with a selection of her interests. The city is a soundscape and Miyuki’s voice was the carrier. 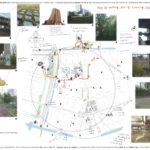