The moment Rik met Mustafa, an Afghani refugee in Athens, they communicated using gestures. He spoke Farsi, Rik spoke English. It was hard to convey any kind of message, but Mustafa did understand that Rik wanted to help him with the work he was doing – collecting paper trash on the streets. They hit the road. At first, the communication-issue led to some awkardness for the both of them. Soon enough, they became a team because of the activity they were doing together. After an hour, Rik got him some tea and with the help of very basic word and gestures, it was possible to have some sort of a conversation. Ganoe/ gesture of ring around a finger/ Afghanistan / Doctor / Money /Problem. Rik spent more time with Mustafa, helping him out, and the conversations grew. They were learning words from each other’s language which led to a playful mix of Farsi and English. They would point at things and name it. Rik was invited to his house and they had fun, regardless of the language barrier. At some point, his friends joined for dinner. They figured as translators. At the end of the field trip, Rik took 333 words from his direct environment. He had them translated and recorded. These words were put on an MP3 player and given back to Mustafa. In that way, he can learn while doing his job or walking through the city. He can see and hear the words at the same time: as if they were still pointing at them together. 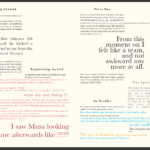