The beauty of the city is made by its people. Rik learnt a lot by simply listening to the people outside and looking at the projects of fellow students. The complexity of Athens became a bit more understandable. One striking thing about Athens is the division between neighborhoods. It seemed that they are all separate spaces, not linked to one another. The only places that felt like proper connections to Rik, were the bridges. He went to visit some of them and met Musta. He is a refugee that works on the streets, gathering paper for a living. With the money he earns, he tries to sustain a family but it is hard to get basic goods such as milk for the baby. Together they live in a refugee camp. Rik decided to work together with him and felt what it was like to be looked down on by others. He was treated the same as Musta; an invisible worker. They walked along Iera Odos, a busy street with lots of traffic. Some people moved away, but maneuvering was very difficult. Rik decided to help Musta and his fellow workers by changing the color of his trolley. He provided the paint and they would go back to the camps to spray their cars. He also gave them bright, colorful shirts to make the workers more visible. This was meant to make their daily routine safer and their presence stronger. 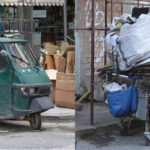 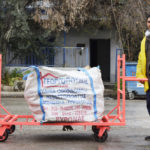 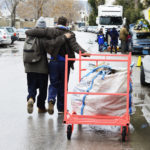