Local bars in the city are among the main food providers and the most social spots to be in. How does food connect locals in Madrid? And what differences can be found between the traditional and modern bars? Sunniva went out to observe the behavior and food rituals in a traditional bar. She mapped it for six days in a row and gathered as much data as she could. She noted down their movements, secretly took pictures, videos and recorded the guests talking over a beer. Once she got back to the Netherlands, Sunniva organized and analysed the information. Three themes popped up: sharing, togetherness and tradition. She translated this into a social experiment where she tried to recreate some of the Spanish bar atmosphere into her living-room. It also led to new designs for plates, linked to the three themes. It can be used to share food in a place that enhances togetherness. This tool exaggerates the qualities of the bar, which Sunniva felt so strongly as an outsider. 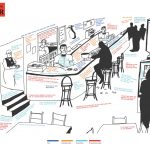 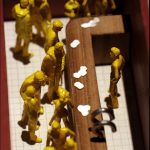 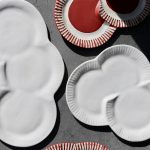 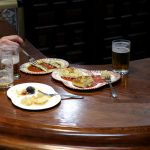